In April, I attempted my first tow with the Suburban. It had been faithful to me thus far but I was still a bit apprehensive about my first tow being @ 270,000 miles. I had already installed an EGT gauge and used Torque Pro (Android App) to watch water and transmission temperatures. I had to tow about 4,000 lbs from New York to Maine.

At first, it seemed easy with no concerns over power. My bigger concern was braking fast since that is an area of my truck that needs some attention. The first series of hills changed my mind. I was having a hard time keeping up speed and EGT’s would climb too high. So I spent most of the trip controlling EGT’s with the throttle. Which meant going 45mph instead of 65mph on inclines. This was the first time error code P0236 was flagged. I had never held the throttle down so long.

The generic OBDII definition is simply “Turbo/Super charger boost sensor “A” circuit range”. When you read deeper and specifically to the 6.5, it means that if you are over 2000 rpm and target boost cannot be achieved for so many seconds, the co 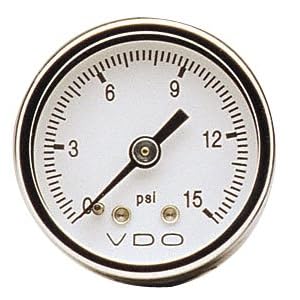 Given the trouble the stock vacuum pump system gives, one would assume the worst and think the pump is toast. Eventually though, P1656 was thrown, again with the generic definition not helping at all. For the 6.5, it is a code for the wastegate solenoid. I lived with it for a while, eventually installing a cheap boost gauge to determine what was going on. Surprisingly the truck never gave me any indication that power was missing, except when towing up hill.

After installing the boost gauge I could see that I would get a 3-6psi spike for about 2 seconds and then boost would drop to 0. This isn’t a turbo failed type of response. It seemed too binary to be a leaking vacuum hose. To troubleshoot, I hooked a hose straight from the pump to the wastegate.

WARNING: Your boost is now not controlled, you have to control it with your foot, do not blow your truck up

If I still had no boost, then it was the turbo or the vacuum pump (I have a Diamond Eye 4″ exhaust so it wasn’t a clogged convertor). I had plenty of boost and noticed turbo whistle immediately even at a slow speed. So now I knew it was either the solenoid or the vacuum lines. At $25 for the solenoid, I took a chance.
The solenoid is mounted with a single 10mm bolt at the driver’s side valve cover. It has one 2-pin electrical connection and one 2-barbed vacuum connection. Swapping it out is a simple 2 min job. No question, my solenoid was clogged or wore out. I don’t know how long I had little boost, but I do know I am enjoying a working system now. 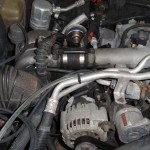 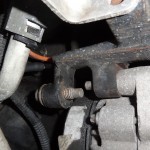 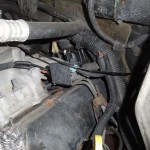 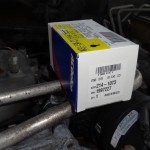 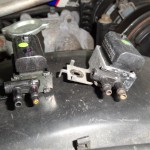